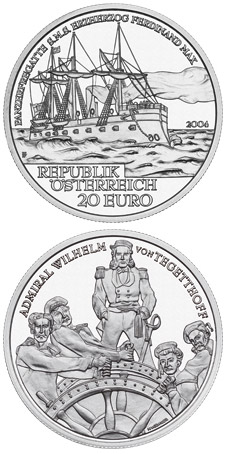 The obverse shows the armoured frigate S.M.S. Ferdinand Max under full steam. Like all the early steam ships she still bore three masts and sails. On the stern the Austrian naval ensingn flutters in the wind, while atop the mizzenmast one can see the admiral's flag. The ship was named for the naval commander-in-chief and brother of the Emperor, Archduke Ferdinand Max. In the historic Battle of Lissa of 1866 Rear-Admiral William Tegetthoff chose her as his flagship. The reverse shows Rear-Admiral Tegetthoff himself after a painting by Anton Romako, standing on the bridge of the S.M.S. Erzherzog Ferdinand Max during the Battle of Lissa. Before him four sailors struggle with the wheel to bring the ship into position to ram the Italian flagship Rè d'Italia. The inscription reads "Admiral Wilhelm von Tegetthoff".