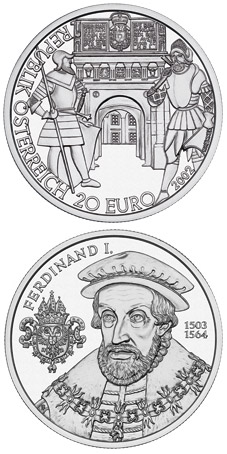 This side of the coin shows the "Swiss Gate" in the Hofburg Palace in Vienna. Ferdinand had the Hofburg enlarged and renovated in the Renaissance style. This gate bears his coat-of- arms and titles. It is flanked by two soldiers of the period as a reminder of the unsettled times which saw Vienna besieged by Turkish armies in 1529 as well as the struggles between Protestants and Catholics during the Reformation. The coin shows a portrait of Ferdinand I, brother of the famous Emperor Charles V. He had been entrusted by his brother with the government of the Austrian lands and was to succeed Charles V on the imperial throne when he resigned his crowns in 1556. Ferdinand was the father of the Austrian line of the Habsburg dynasty as opposed to the Spanish Habsburgs descended from Charles's son, Phillip II. He settled with his family and court in Vienna and did much in the way of administrative reform and of encouraging art, music and the New Learning.