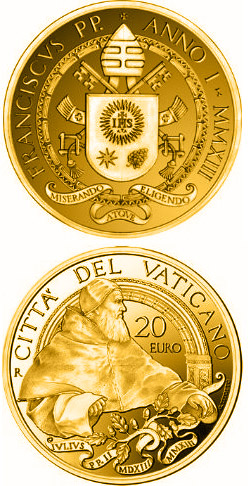 The Philatelic and Numismatic Office will dedicate a special coin issue to mark the 500th anniversary of the death of Pope Julius II (Giuliano della Rovere) and the election of Leo X (Giovanni de’ Medici). Pope Julius II worked within the framework of the delicate political equilibrium of his time, forging alliances with one or the other European power in an effort to widen the political influence of the Papal States. Julius II was a great patron who brought to Rome some of the finest artists of all time, including Michelangelo, Raphael and Bramante. His ambitious urban project, which aimed to redefine the profile of Rome to reflect the glory of its imperial past, remained unfinished by the time he died. Pope Leo X, the Florentine son of Lorenzo the Magnifi cent, endeavoured to show the pomp and splendour of the great Medici family. In addition to numerous urban projects brought to conclusion in his case, he aimed to make the Eternal City the cultural centre of Christianity. He reformed the university, collected manuscripts, books and masterpieces of classical antiquity, and hosted in the papal court scholars such as Bembo, Guicciardini and Erasmus of Rotterdam. He was more diplomatic in foreign policy matters than his predecessor, and he carried out a profound modernization of the State apparatus. The two great Popes passed the baton during the 1513 year of grace, a period of extraordinary growth for Italian culture and art. They were creators and inspirations for works of art which today are universally recognized as the finest masterpieces and living testimonies to faith in God.