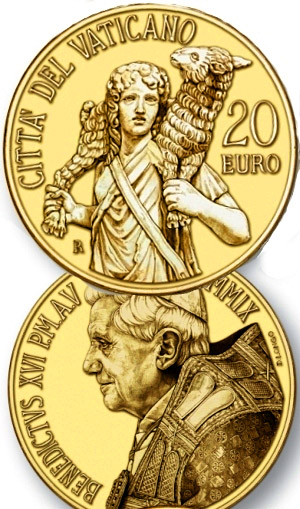 The triennial artistic series featuring masterpieces of sculpture from the Vatican Museums continues now in its second year. The 20 euro coin depicts The Good Shepherd, a sculpture dating from the 4th century on display in the Pio-Christian Museum, and in Christian symbolism representing Jesus the Saviour. At a time when the Crucifixion could not yet be shown, the Good Shepherd served as a symbol of Christ’s sacrifice for humanity. The 50 euro coin depicts The Laocoon Group, with marine serpents wrapping around the priest of Apollo and his two sons, who die in the attack. It was Poseidon’s revenge against Laocoon for having opposed allowing the wooden horse given by the Greeks to be brought within the walls of Troy. At first the sculpture was thought to be the work of three different artists, but later it was identified as a marble copy of a Hellenistic sculptural group. Originally, the sculpture may have been commissioned to decorate the home of a wealthy Roman. It was found in 1506 and purchased immediately by Pope Julius II, who was fond of classical art and had it placed in the Belvedere Garden. It is without a doubt one of the great masterpieces of sculpture in the world, and for this reason it is prominently displayed in the Vatican Museums.