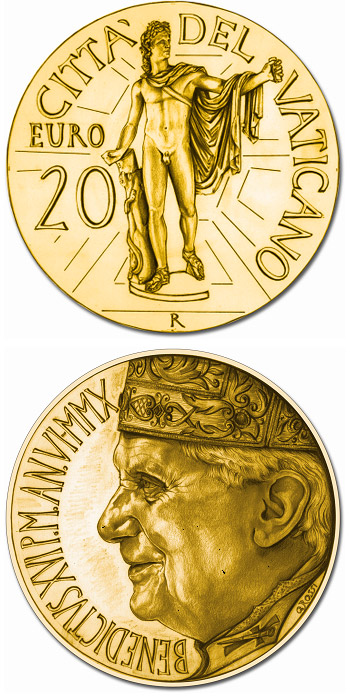 The triennial artistic series featuring masterpieces of sculpture from the Vatican Museums continues now in its final year. The 20 euro coin has a depiction of the "Apollo of the Belvedere" sculpture, a copy of a fourth century BC Greek bronze made during the time of Hadrian (130-140 AD). The 204 cm tall statue was discovered in the 15th century at Nero’s Villa in Anzio. Originally on display in the Courtyard of the Belvedere, it was later moved to the Pio Clementine Museum where it is found today. It is considered one of the great masterpieces of sculpture and a perfect representation of male beauty. On the 50 euro coin an image of "Augustus of Prima Porta" is depicted, also known as the "Augustus Armour", referring to the leather armour of the Roman legions. The statue shows the emperor Augustus standing with his right arm raised as a gesture calling for silence before an official speech (adlocutio) to rally the troops for battle. The armour is the most interesting part of the sculpture. Various elements decorate it with the most notable relief showing a defeated king of the Parthians returning a military insignia taken previously from Roman troops.
Standard Catalog of World Coins 1901-2000 Impressive in size, scope and detail unparalleled in the market, the 2020 Standard Catalog of World Coins, 1901-2000, provides the most compelling and complete catalog to 20th Century coins in the world. shop now