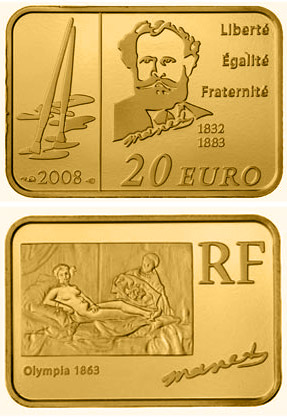 This collection was initiated in 2007 with the Degas coin and is being continued until 2015. Manet is represented this year by the painting of Olympia (1863). It was initially destined for the "Salon des Refusés" and was only shown by the artist in 1865. It was (audaciously) inspired by Titian’s Venus d’Urbin. This series will progressively present the artists and 5 pictorial streams : from classicism (17th century) to modernism (20th century). The originality of this series is illustrated through the technical and aesthetic innovation of its rectangular shape, like the painting it features. The obverse features the representation of the painting Olympia, the date of its creation and the signature of the artist.