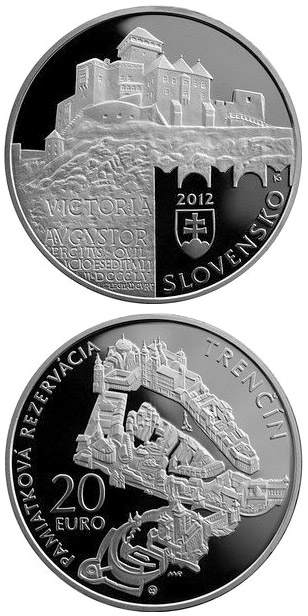 The obverse side of the coin shows the historical townscape of Trnava University and the University Cathedral of St John the Baptist. The national emblem of the Slovak Republic is in lower left part of the field, next to the country name SLOVENSKO. Below them are two horizontal lines and the year 2011. The reverse side depicts Trnava’s significant architectural landmarks: the synagogues, the Church of St Anne, the Church of the Assumption of the Blessed Virgin Mary, the Church of St Jacob, the Basilica of St Nicholas, the Town Tower, the Church of the Holy Trinity, the Church of St Joseph, and the fortification tower. To the side of this scene is a depiction of the Virgin Mary of Trnava. In the upper part of the field are two lines of text, reading “TRNAVA PAMIATKOVÁ REZERVÁCIA” (“Historical Preservation Area of Trnava”), and below them are two horizontal lines and the nominal value of 20 EURO. The stylised initials of the coin’s designer, Mgr. art. Roman Lugár, and the mark of the Kremnica Mint are set in the tower placed at the base of the coin.