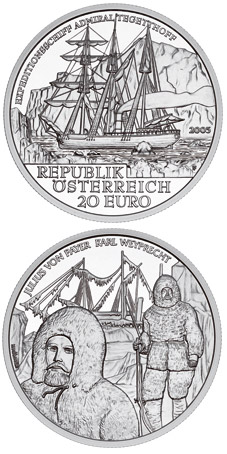 The obverse side shows the 220 ton sailing ship "Admiral Tegetthoff", which was especially constructed in Bremerhaven (Germany) for the Austro-Hungarian polar expedition. It was fitted with a steam engine to enable it to sail independently of winds. Thomas Pesendorfer, chief engraver of the Austrian Mint, has depicted the ship at the beginning of the expedition as the "Tegetthoff" enters the icy waters of the Arctic Circle. The ship soon became frozen fast in ice drifts, from which neither sail nor steam could free them. The ship was named after Austria's most famous admiral, Wilhelm von Tegetthoff, who had died on 7th March, 1871, just a year before. The expedition was led by naval commander, Karl Weyprecht, and infantry first lieutenant, Julius von Payer. The reverse side shows the two explorers in Arctic gear in the midst of the icy landsacpe of "Kaiser Franz Joseph Land", which they had discovered to the north of Russia. Behind them is the frozen ship which they had to eventually abandon and strike out across the ice and snow to try to reach the open sea. In three open boats they finally reached the Russian island of Nowaja Semlja where they were picked up and could make their way home.