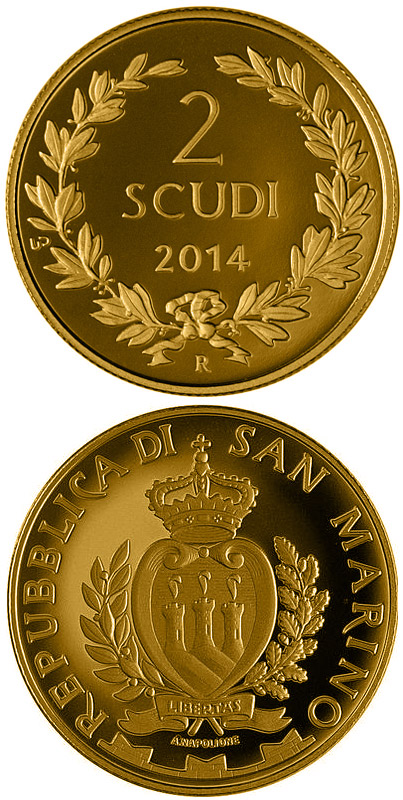 The first coin of the Republic of San Marino was issued in October 1864 with a mintage of 280,000 coins. It was a copper coin of 5 grams with a value of 5 cents, it depicted on the obverse the coat of arms of San Marino with the three Towers and the crown, encircled by a laurel and an oak branch. It was minted by Regia Zecca di Milano. The Monetary agreement signed with Italy in 1862 stated that the coins of San Marino could have legal tender in Italy only in case they had the same decimal system, title and weight as the Italian coins. The agreement, signed by the President of the Italian Parliament Urbano Rattazzi and the Captains Regent Melchiorre Filippi and Domenico Fattori, represented the first bilateral agreement between Italy and San Marino, two sovereign states with legal equality of the contracting parties. The Republic of San Marino celebrates this anniversary with a 2 Scudi gold coin in proof. The obverse of the coin depicts the coat of arms of the Republic of San Marino, encircled by the inscription “REPUBBLICA DI SAN MARINO”; in the lower part the artist’s name “A. NAPOLIONE”. The reverse of the coin represents the value “2 SCUDI” and the year of issue “2014”, encircled by two divergent laurel branches tied with a ribbon. Below in the centre, “R”, acronym of Rome, symbol of the Italian Mint; to the left, the initials of the designer Uliana Pernazza “UP”.