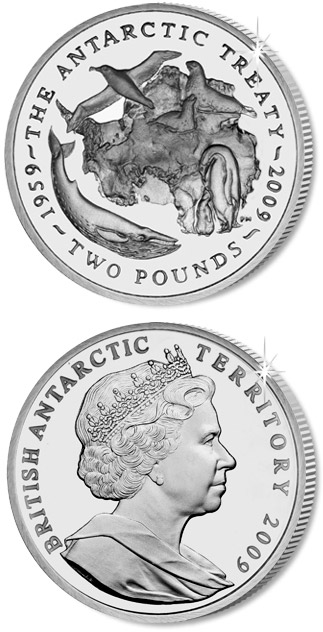 This second commemorative coin for the British Antarctic Territory celebrates the 50th Anniversary of the Antarctic Treaty. The treaty was signed in December 1959 by 12 countries and entered into force in 1961 – the UK being the first state to ratify. There are currently 48 state parties and the treaty set aside Antarctica as a scientific preserve, established freedom of scientific investigation and banned military activity on the continent. The design of this coin fits the cause and real aim of the treaty. The background features a map of the Antarctic which is surrounded by beautifully detailed images of the marine life that inhabit the area and which the Antarctic Treaty System aims to preserve. The marine life featured on the coin are; the Albatross, the Blue Whale, an Emperor Penguin and an Elephant Seal.