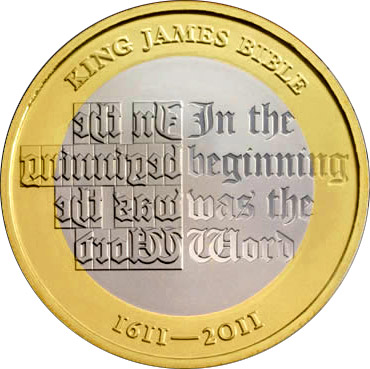 Commemorate a beloved cornerstone of our culture and language. Four centuries since its first publication; the King James Bible; still praised by scholars for its majestic style and poetic rhythms is now celebrated on the 2011 £2 coin.
Religious tension was high in 1604, when James convened the Hampton Court Conference with the Puritans and some Anglican clergymen. The Puritans thought that some parts of the existing English bible translations were inaccurate, and James agreed that a new bible should be created. He instructed 54 scholars carefully, ensuring the new version reflected his beliefs about the Church of England. 47 of those scholars went on to perform the translation. Ironically, what is now called the "Authorised Version" was not officially authorised at the time, but the King’s Printer stopped printing the previous Bishop’s Bible and so the new version quickly became the standard text in English churches. Its full title was "THE HOLY BIBLE, Conteyning the Old Testament, AND THE NEW: Newly Translated out of the Original tongues: & with the former Translations diligently compared and revised, by his Majesties special Comandement". 400 years on, the King James Bible remains one of the most loved translations of the bible, representing the very best of Elizabethan English. Scholars praise it for its majestic style and poetic rhythms. The most printed book ever, it is still the third most widely sold bible by number of copies.