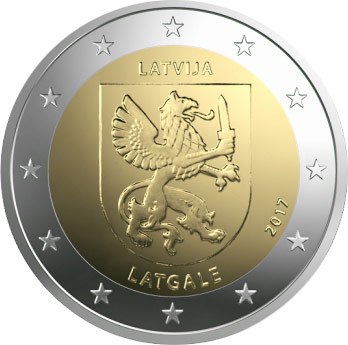 The graphic designs of the national side of the new commemorative coins have been created by artist Laimonis Šēnbergs, but the plaster models – by Jānis Strupulis. Laimonis Šēnbergs is the Deputy Chairman of the Coin Design Commission of Latvijas Banka and author of the graphic design of 19 collector coins. Jānis Strupulis has created the graphic design of two coins and plaster models of several dozens of Latvijas Banka's collector and circulation coins. The European side of these euro commemorative coins bearing the nominal value (artist Luc Luycx) is the same as that of other 2 euro circulation coins, including material and size.

The new commemorative coins will be circulated in the same way as any other circulation coins, reaching commercial and other enterprises as well as population through banks. As of Tuesday, 14 November, the coins will be available for exchange at the Cashier's Offices of Latvijas Banka in Riga and Liepāja. The mintage of each coin is 0.5 million pieces. Experience of Latvijas Banka shows that this quantity is sufficient to allow all interested persons to exchange the coins over a period of at least several weeks. 7 000 coins of each type of Brilliant Uncirculated quality in a special souvenir packing will also be on sale. The price of the coin at Latvijas Banka Cashier's Offices is 7.30 euro.
Standard Catalog of World Coins 1901-2000 Impressive in size, scope and detail unparalleled in the market, the 2020 Standard Catalog of World Coins, 1901-2000, provides the most compelling and complete catalog to 20th Century coins in the world. shop now