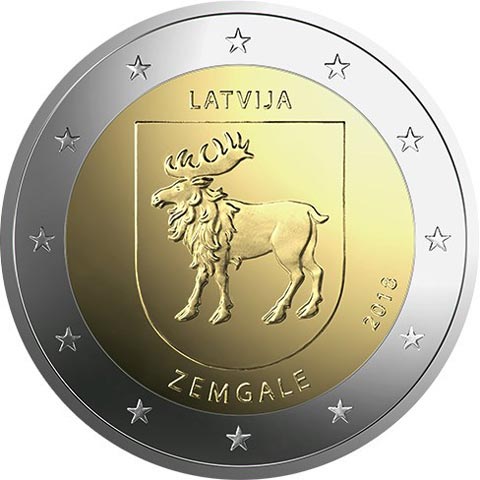 On 26 September, the new 2 euro commemorative coin will be issued concurrently with a special coin set in souvenir packing consisting of the four coins dedicated to Latvia's cultural and historical regions.

The graphic design of the national side of the new commemorative coin has been created by artist Laimonis Šēnbergs, but the author of the plaster model is Jānis Strupulis. Laimonis Šēnbergs is the Deputy Chairman of the Coin Design Commission of Latvijas Banka and author of the graphic design of several prize-winning collector coins. Jānis Strupulis has created the graphic design of two coins and plaster models of several dozens of Latvijas Banka's collector and circulation coins. The European side of these euro commemorative coins bearing the nominal value (artist Luc Luycx) is the same as that of other 2 euro circulation coins, including material and size.

The symbols incorporated in the coats of arms established by the Regulations on Coats of Arms of Latvia's Regions, adopted on 26 April 1930 and having statutory effect, are related to historical developments in the present-day territory of Latvia. In 2012, a special law was passed to lay down legal protection of these coats of arms as national symbols. They were created by artist Kārlis Krauze (1904–1942) in 1930, and the coat of arms of Zemgale features a silver elk on a blue background.

Zemgale is the only cultural and historical region of Latvia bordering Kurzeme, Vidzeme and Latgale. It ranks among the most fertile Northern European regions, and its cereal fields have brought prosperity to the region for many centuries. The area is also well-known for its abundance of rivers and rich history, in which a major role is played by Semigallians' fight for freedom in the 13th century.

The new commemorative coins will be circulated in the same way as any other circulation money, reaching commercial and other enterprises as well as the general public through banks. As of Wednesday, 26 September, the coins will be available for exchange at the Cashier's Offices of Latvijas Banka in Riga and Liepāja. The mintage of the coin is 0.5 million pieces. Experience of Latvijas Banka shows that this quantity is sufficient to allow interested parties to exchange the coin over a period of at least several weeks. The total mintage of 2 euro commemorative coin dedicated to Zemgale in souvenir packing is 7 000 coins, out of which 2 000 coins are included in a special coin set. Thus, it will be possible to purchase 5 000 coins of Brilliant Uncirculated quality in a special souvenir packing. The price of the coin at Cashier's Offices of Latvijas Banka will be 7.30 euro.

2 000 coin sets, consisting of the four 2 euro commemorative coins dedicated to Latvia's cultural and historical regions, will be available in a special souvenir packing. The price of the set at Cashier's Offices of Latvijas Banka will be 29.00 euro.
Source: Latvijas Banka