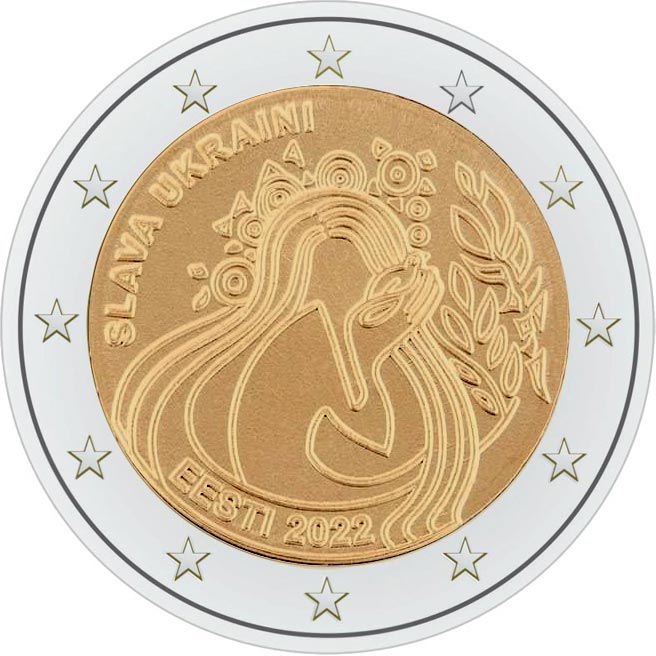 Eesti Pank is planning to issue into circulation a two-euro coin dedicated to Ukraine and freedom that has been designed by a young Ukrainian refugee from the war who is studying at the Estonian Academy of Arts. The coin with the special design should enter into circulation towards the end of this year. Coin cards with the two-euro coin for Ukraine should go on sale this summer though, and Eesti Pank will give the income from sales of them to the Ukrainian central bank. The Supervisory Board of Eesti Pank approved the design of the coin at an extraordinary meeting held this week. The coin was designed by Daria Titova, who is originally from Kharkiv, and who is currently studying at the Estonian Academy of Arts. The designer explained that the coin features a girl as a symbol of tenderness, protecting a bird in her hand. The design also features an ear of wheat.
The Supervisory Board of the central bank decided to use the text Slava Ukraini on the coin to symbolise the independence and resistance of Ukraine. “It is the first time that a coin issued by Eesti Pank has text in a foreign language, but this was an extraordinary case, and Slava Ukraini embodies the drive of Ukraine towards freedom”, said Chair of the Supervisory Board Mart Laar. “We were looking at Eesti Pank for a way to support the Ukrainians in their fight, and we decided that minting a circulation coin with a special design would let us show our partnership with the Ukrainian central bank by supporting them financially and by sending out a coin with a symbolic message to everybody in Europe. We felt it was important that the coin dedicated to Ukraine and freedom should be made as quickly as possible, and that it should be designed by a Ukrainian. The young Ukrainian art students, their supervisor Professor Ivar Sakk and the Estonian Academy of Arts all helped us in doing that”, said Governor of Eesti Pank Madis Müller. The design competition for the coin was overseen by Vice Rector for Academic Affairs at the Academy of Arts Anne Pikkov. “As soon as the war started the Academy allowed art students who had to leave Ukraine to continue their studies with us. When Eesti Pank suggested this wonderful idea to us, we quickly organised the competition, and Ukrainian students from different disciplines immediately started working on ideas. We then organised a judging panel to consider the finished works. It gave us a special energy that still resonates, as the students felt that they could really do something to help their country and to spread a vitally important message”. It normally takes more than 18 months to create a two-euro coin with a special design, but in this case the preliminary work started in April, and the central bank hopes to issue 2 million of the two-euro coins dedicated to Ukraine at the end of this year or early next year. The design of the two-euro coin needs to be approved by the European Commission and the member states of the European Union. While the coins should start to appear in shops and wallets at the end of this year, Eesti Pank will start to sell a coin card featuring the same coin this summer. “This is an extraordinary solution, but as we are giving the revenues from selling the coin card to the Ukrainian central bank, we wanted to set up this channel of support as fast as possible. Ukraine is fighting for its freedom, and every euro counts”, said Mr Müller. Eesti Pank is initially planning to produce 40,000 coin cards, but is prepared to increase the number if demand should prove stronger. The coin card was designed by Vladimir Taiger, who was also an advisor for the design of the coin. The price of the coin card will be decided before it goes on sale. The central banks of Latvia and Lithuania support the idea of commemorating Ukraine’s fight for freedom – they are also planning to issue euro coins dedicated to Ukraine.