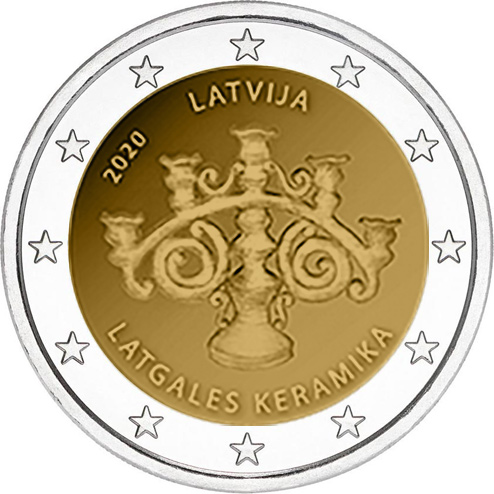 Latvijas Banka plans to issue a 2 euro commemorative coin "Latgalian Ceramics" dedicated to the Latgalian pottery next spring. The traditional pottery established itself for substantial periods of time in two districts, Latgale and Kurzeme, but only in Latgale it has survived throughout the times and has been passed down to the next generations. The Latgalian pottery is included in the Latvian Culture Canon and it represents one of the brightest pages of traditional culture. The national side of the coin will depict a characteristic piece of Latgalian ceramics – clay candelabrum. It will also bear an inscription LATGALES KERAMIKA (Latgalian ceramics), the country name (LATVIJA) as well as the year of issue (2020). The graphic design of the national side of the new commemorative coin has been created by artist Gundega Rancāne, but the author of the plaster model is Jānis Strupulis. The common side of the coin bearing the nominal value (artist Luc Luycx) is the same as that of other 2 euro circulation coins, including material and size. The estimated mintage of the 2 euro commemorative coin "Latgalian Ceramics" is 400 000 pcs, 5 000 coins in BU quality and 7000 coins in coin sets.