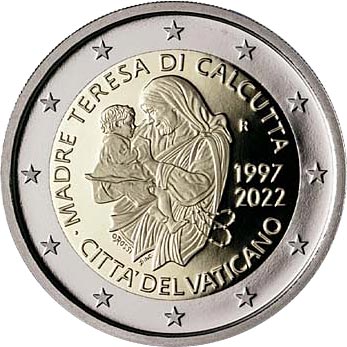 In 1997 at the age of 87 the earthly life of Mother Teresa of Calcutta came to an end. The Vatican State Mint dedicates its two euro coin, a dual brilliant uncirculated and proof version, to her life and work. Our artist Orietta Rossi features on the reverse of the coin Mother Teresa holding an Indian child in her arms, looking at him with a maternal expression. This moving image reflects all the love, commitment and dedication that Mother Teresa offered to alleviate the suffering of the “poorest of the poor.” Born in 1910 in Skopje, the present-day Republic of North Macedonia, she was raised according to the precepts of the Catholic Church. At a very young age she became interested in the work of missionaries in India and, after taking her vows, devoted her entire life to aiding and protecting the most needy. The Congregation of the “Missionaries of Charity,” which she founded, was recognized by Pope Pius XII in 1950. Since then they have established a presence in numerous countries throughout Europe, Africa, Asia and Oceania.