2 euro - 125th Anniversary of the birth of Pope Paul VI 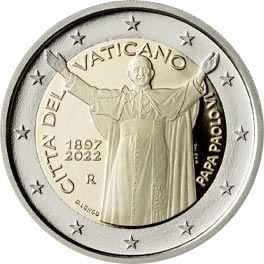 This year marks the 125th anniversary of the birth of Giovanni Battista Montini, born in Concesio in 1897 and elected pope in 1963 taking the name Paul VI. The Vatican State Mint celebrates this anniversary with the 2 euro bimetallic coin in a dual brilliant uncirculated and proof version. On the coin we see the Pope smiling and opening his arms wide with the gesture he often used when greeting the crowds. He wears the cassock tied at the waist with a fascia bearing the coat of arms of his pontificate embroidered on the bottom, his cape and cloak. Our artist Daniela Longo produced the engraving on the reverse side of the coin showing the tapestry displayed on the facade of St. Peter’s Basilica during the beatification of Paul VI. The celebration took place on 19 October 2014 with Pope Francis presiding and Pope Emeritus Benedict XVI in attendance. The tapestry shows the smiling pope standing as he opens his arms as if to virtually embrace all the people.