2 euro - 70 years of the Universal Declaration of Human Rights 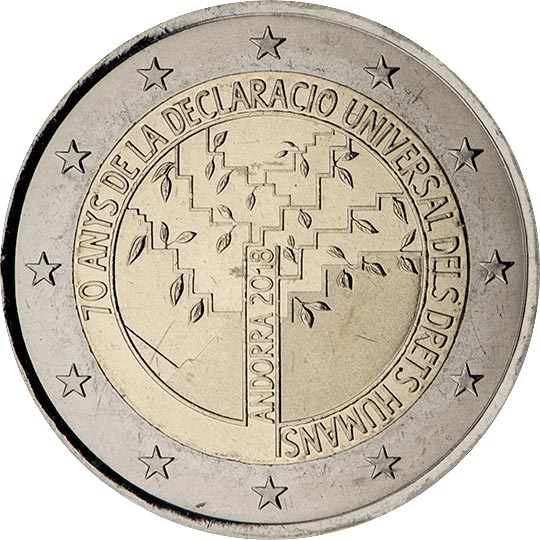 The Universal Declaration of Human Rights (UDHR) is a historic document that was adopted by the United Nations General Assembly at its third session on 10 December 1948 as Resolution 217 at the Palais de Chaillot in Paris, France. Of the then 58 members of the United Nations, 48 voted in favor, none against, eight abstained, and two did not vote.
The Declaration consists of 30 articles affirming an individual's rights which, although not legally binding in themselves, have been elaborated in subsequent international treaties, economic transfers, regional human rights instruments, national constitutions, and other laws. The Declaration was the first step in the process of formulating the International Bill of Human Rights, which was completed in 1966, and came into force in 1976, after a sufficient number of countries had ratified them.
Some legal scholars have argued that because countries have constantly invoked the Declaration for more than 50 years, it has become binding as a part of customary international law.However, in the United States, the Supreme Court in Sosa v. Alvarez-Machain (2004), concluded that the Declaration "does not of its own force impose obligations as a matter of international law."[3] Courts of other countries have also concluded that the Declaration is not in and of itself part of domestic law. Source: Wiki