2 euro - 500th Anniversary of the Birth of Tintoretto 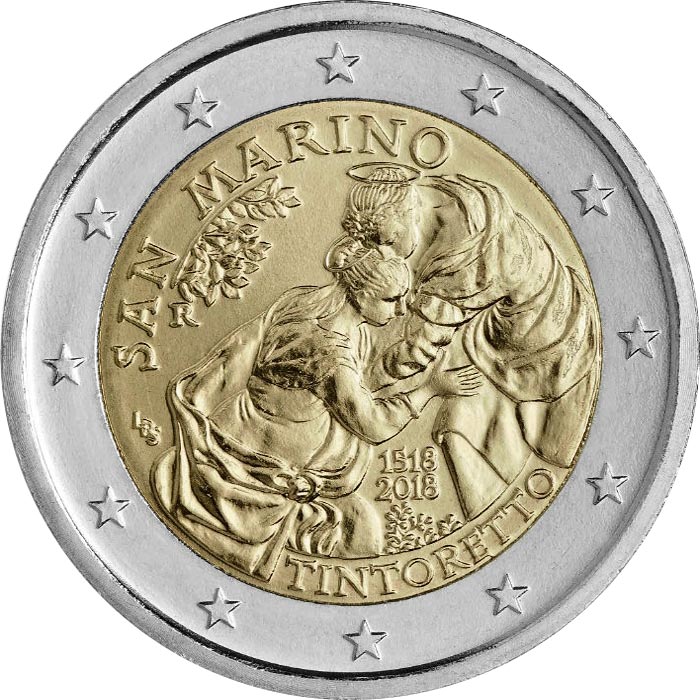 Tintoretto (born Jacopo Comin, late September or early October, 1518 – May 31, 1594) was an Italian painter and a notable exponent of the Renaissance school. For his phenomenal energy in painting he was termed Il Furioso. His work is characterized by its muscular figures, dramatic gestures, and bold use of perspective in the Mannerist style, while maintaining color and light typical of the Venetian School.
In his youth, Tintoretto was also known as Jacopo Robusti as his father had defended the gates of Padua in a way that others called robust, against the imperial troops during the War of the League of Cambrai (1509–1516). His real name "Comin" was discovered by Miguel Falomir of the Museo del Prado, Madrid, and was made public on the occasion of the retrospective of Tintoretto at the Prado in 2007. Comin translates to the spice cumin in the local language. In 1594, he was seized with severe stomach pains, complicated with fever, that prevented him from sleeping and almost from eating for a fortnight. He died on May 31, 1594. He was buried in the church of the Madonna dell'Orto by the side of his favorite daughter Marietta, who had died in 1590 at the age of thirty. Tradition suggests that as she lay in her final repose, her heart-stricken father had painted her final portrait.