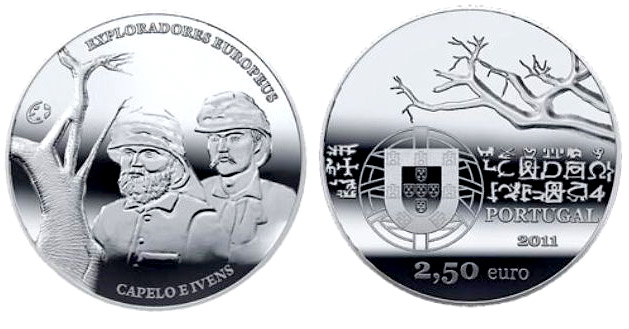 In the last quarter of the 19th century, under the auspices of the Lisbon Geographical Society, Hermenegildo Capelo (1847-1917) and Roberto Ivens (1850-1898) embarked on two of the most notable expeditions in the history of humanity; first from Benguela to the lands of Laca, and then from Angola to Contracosta. Their intention was to explore the African interior, more specifically the territories lying between the provinces of Angola and Mozambique, showing that the Portuguese will to "bring new worlds to the World" did not dry up after the Voyages of Discovery. During these expeditions, Hermenegildo Capelo and Roberto Ivens performed geographical and cartographic surveys and collected meteorological data and many natural history specimens that contributed a lot to increasing scientific knowledge at the time.
In the year in which the European Series is dedicated to the theme of "European Explorers", the Portuguese Mint and Official Printing Office is paying homage to the courage and enterprising spirit of Hermenegildo Capelo and Roberto Ivens.