1,500 kroner - 100th anniversary of the Dissolution of the Union between Norway and Sweden in 2005 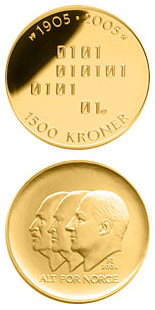 To commemorate the 100-year anniversary of the dissolution of the union between Norway and Sweden in 2005, a 1500-krone gold commemorative coin has been struck. The coin, which is proof quality and legal tender, was put into circulation on 7 June 2005.

Reverse: Here the artist has wanted to illustrate the new age by means of binary code - "computer language" - which consists of zeros and ones. Above the motif: 1905-2005, flanked on the left by the initials of the Director of Det Norske myntverket AS, Magne Flågan: MF and on the right by the mintmark of Det Norske Mynverket: the crossed pick and hammer. Below the motif the inscription: 1500 KRONER. To the right of the last 1, the signature of the artist, Tomasz B. Ozdowski, TB.