This limited edition commemorative coin is issued to celebrate the 70th anniversary of the birth of Irish music legend Rory Gallagher. Born in Ballyshannon, Co Donegal, Rory’s family relocated to Cork City when he was at a young age. The self-taught musician became an internationally acclaimed rock hero. After forming the band Taste in the 1960s, he recorded as a solo artist throughout the following decades (until his death in 1995), selling over 30 million albums worldwide. The design of the coin is by numismatic artist, Michael Guilfoyle. The coin pays tribute to Rory Gallagher’s status as one of the world’s greatest rock guitarists, with a depiction of Rory in a characteristic pose with his beloved guitar. Behind the main focal point of the design is a graphic representation of a vinyl record overlaid with a graphic map, alluding to Rory’s classic live album from 1972, “Live in Europe”. It also highlights his appeal to an international audience beyond his native Ireland. Sadly, Rory Gallagher passed away in 1995 at the age of 47, but his music continues to enthral music lovers throughout the world. The proof coin comes in a presentation box with a certificate of authenticity. This limited issue commemorative coin has been struck in .925 sterling silver to proof quality and is limited to 3,000 pieces. The diameter of the coin in 38.61mm and it weighs 28.28g. This coin is the first in a three coin series entitled “Modern Irish Musicians” which will run from 2018-2020. 2019 marks the 70th anniversary of Phil Lynott’s birth and 2020 marks the 80th anniversary of Luke Kelly’s birth. 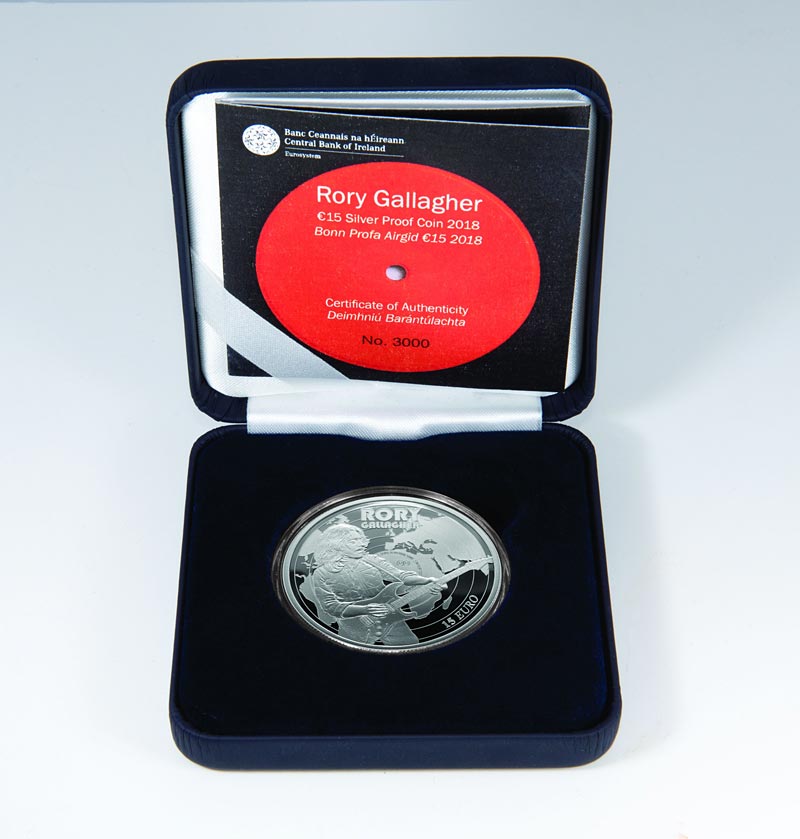