This limited edition commemorative coin is issued to celebrate the 70th anniversary of the year of birth of Irish music legend Philip Lynott. Lynott was born in the West Midlands of England, but grew up in Dublin with his grandparents. After fronting several bands Lynott formed Thin Lizzy in 1969. The band first found success with “Whiskey in the Jar”, followed by several hits in mid-1970s with songs such as “The Boys Are Back in Town”, “Jailbreak”and “Waiting for an Alibi. Lynott also enjoyed success as solo artist with two albums producing the hits “Dear Miss Lonely hearts”, “King’s Call” and “Old Town”, the music video for the latter famously showing Phil walking through the streets of his hometown Dublin. Phil Lynott sadly passed away in 1986 at the age of 36 but his music and legacy continues to endure and inspire music lovers worldwide. The coin designer, Sandra Deiana, captures Phil Lynott’s presence on stage with his base guitar, a scene so recognisable to music fans. The proof coin comes in a presentation box with a certificate of authenticity. This limited issue commemorative coin has been struck in .925 sterling silver to proof quality and is limited to 3,000 pieces. The diameter of the coin in 38.61mm and it weighs 28.28g This coin is the second in a three coin series entitled “Modern Irish Musicians” which will runs from 2018-2020. 2018 marked the 70th anniversary of Rory Gallagher’s birth and 2020 marks the 80th anniversary of Luke Kelly’s birth. 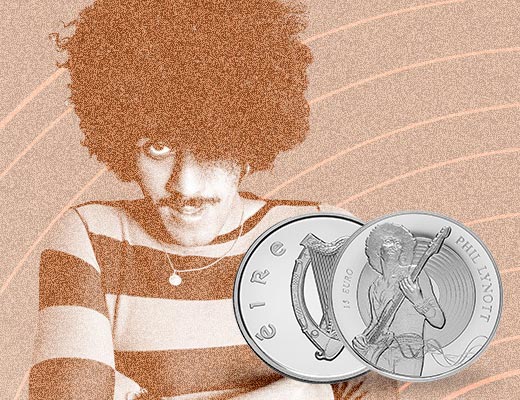