100,000 forint - 50th Anniversary of the 1956 Hungarian Revolution and War of Independence 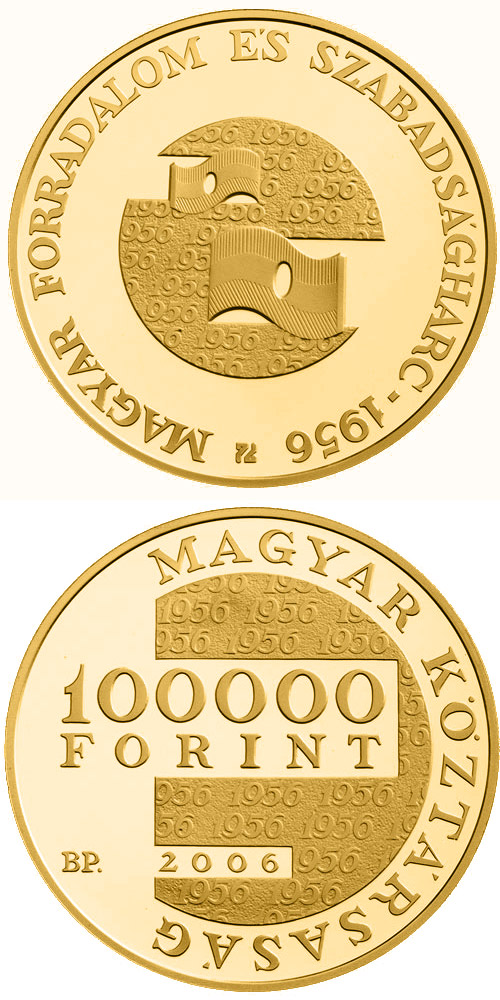 On 18 October 2006 the Magyar Nemzeti Bank issued a gold collector coin with a face value of HUF 100,000 to commemorate the 50th anniversary of the 1956 Hungarian Revolution and War of Independence. On the obverse of the collector coin the date “1956” is repeated in lines beneath each other on a matt central field. On the reverse there is likewise the date “1956” repeated on a circular matt field. In both the top left and bottom right parts of the matt field there is a Hungarian flag with a hole. At the edge of the coin there is the circular legend “HUNGARIAN REVOLUTION AND WAR OF INDEPENDENCE-1956”. The designer of the coin Attila Rónay symbolised the dictatorial Soviet system that tolerated no opposition with the regimented lines of the date “1956” in relief on the surface of the coin. The depictions of the Hungarian flags with a hole flying on the surface of the coin refer to the War of Independence.
The collector coin is made of .986 fine gold, weighs 20.946 grams, and has a diameter of 38.61 mm and a smooth edge. 5,000 coins may be struck, produced by the special “proof” technology.