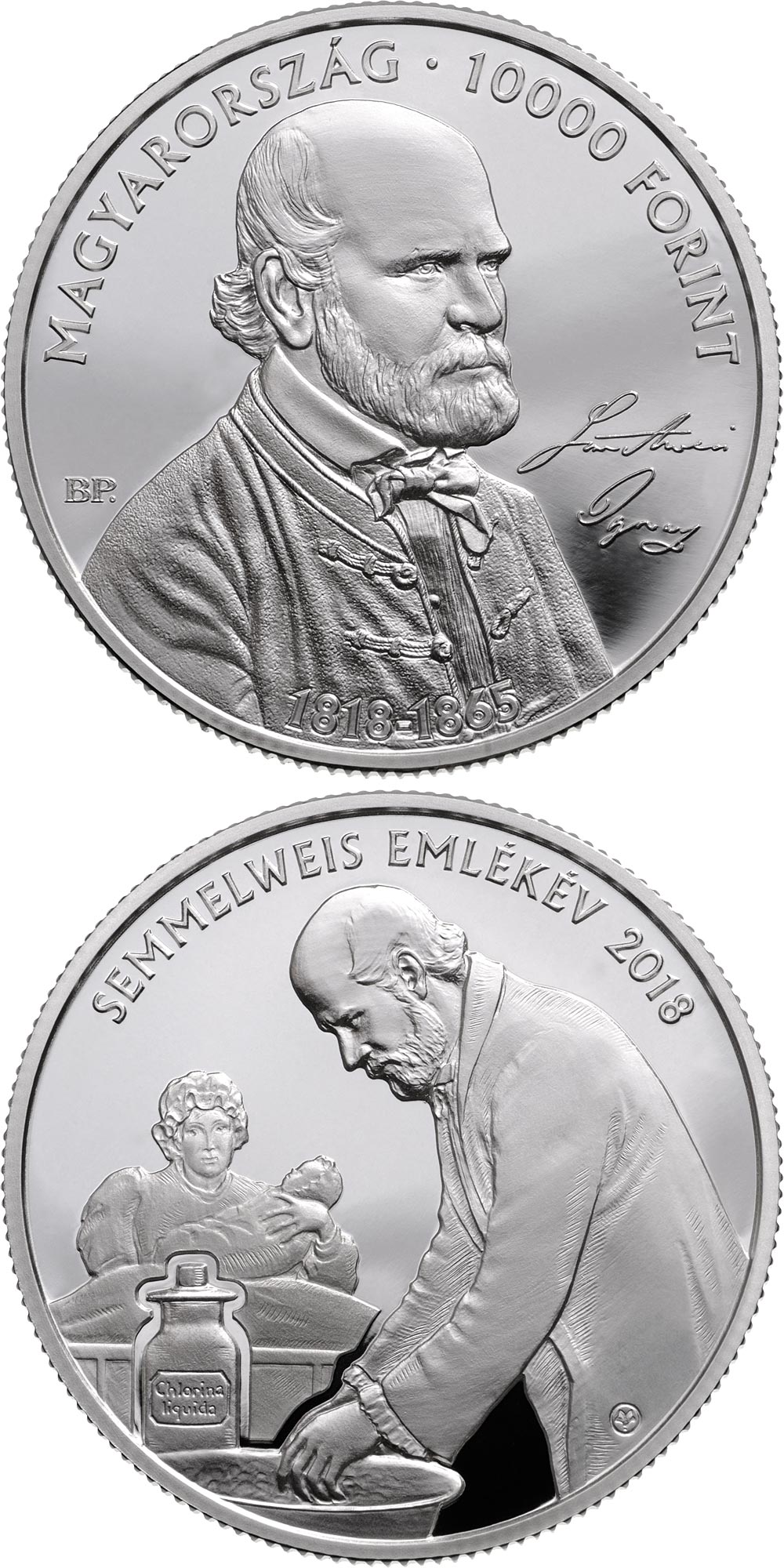 The collector coins were designed by applied artist Gábor Kereszthury. Both coins have identical graphic design, with the denomination being the only difference. On the obverse, the half-body portrait of Ignác Semmelweis is shown along with his signature and the years 1818-1865 hidden in his clothing, which refer to the years Ignác Semmelweis was born and died. The compulsory design elements of collector coins are placed here: the denominations 10,000 and 2,000 FORINT, the inscription MAGYARORSZÁG, as well as the mintmark ‘BP.’ containing a special security element. Ignác Semmelweis, “saviour of mothers”, was the first to discover that childbed fever was not an epidemic, but it is an infection passed on by doctors. His discovery was based on statistical data and his own scientific research and observation. Using a cause and effect relationship he provided evidence that the childbed fever having resulted in many deaths until then, and the infection causing the fever may be prevented if the persons in direct contact with women in labour carefully sanitised their hands. With the strict introduction of hand wash with chlorinated lime solutions the death rate dropped from 25-30% to 1% in the maternity ward he managed. The prevention suggested by Semmelweis was considered revolutionary, he was 30 years ahead of his time, but his method was not readily accepted by the medical science of his day. His discoveries and theories were only recognised and applied from 1877, as a result of the work of Louis Pasteur, Robert Koch (bacteriology), and Joseph Lister (antiseptic surgery). On the reverse, a situation in a hospital is shown, where the famous Hungarian doctor is sanitising his hands with chlorinated lime in the foreground, and a mother is nursing his child in the background. The practice of washing hands with chlorinated lime discovered and implemented by Semmelweis has an outstanding role on the coin as it is highlighted by the vial containing chlorinated lime and the shining bright circular line around the scene. In the upper legend the lettering ‘SEMMELWEIS EMLÉKÉV 2018’ is placed referring to the occasion of the issuance. The year also serves as the mint year. Both collector coins are 38.61 mm in diameter. Their edge is reeded. The coin with a face value of HUF 10,000 is struck in 925‰ silver and the non-ferrous metal coin with a face value of HUF 2,000 is made from an alloy of copper (75%) and nickel (25%). The silver coin weighing 31.46 grams is made in proof finish and the non-ferrous metal coin weighing 30.8 grams is made in BU finish. The colle