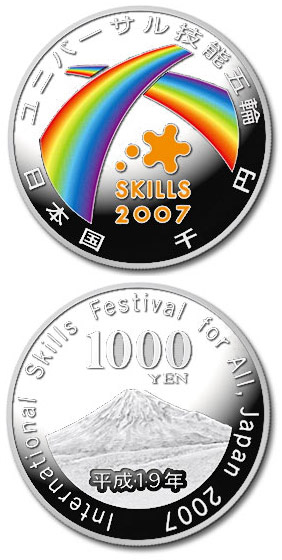 Japan Mint has released a 1,000 yen silver proof coin to commemorate International Skills Festival for All, Japan 2007 to be held in Shizuoka Prefecture in November, 2007. International Skills Festival for All, Japan 2007 consists of 39th WorldSkills Competition (November 7-21, 2007) and 7th International Abilympics (November 13-18, 2007). WorldSkills Competition and International Abilympics will take place at the same time in the same country for the first time. The obverse of the coin features rainbows and the logo of International Skills Festival for All, and the reverse side features Mt. Fuji. The edge of the coin is helically milled, and the latent image technology is used. With the sophisticated pad-printing technology, the rainbows are beautifully colored in seven colors: Light blue, blue, purple, red, orange, yellow and yellow- green. The coin weighs 31.1g (1oz) and has a diameter of 40mm. Total mintage of the coin is limited to 80,000, and up to five percent, equal to 4,000, are allocated for overseas markets.