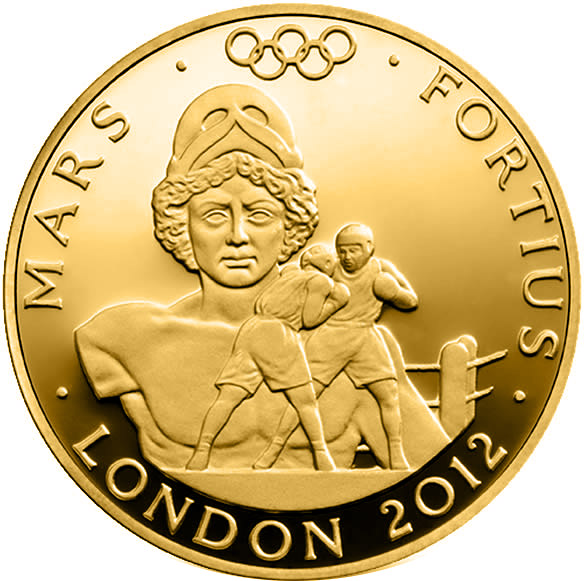 The Gold Series ‘Faster, Higher, Stronger’ is the signature collection in the London 2012 Coin programme. Here we present the premium £100 coin in the ‘Stronger’ sub-collection. Containing a full ounce of fine gold, this weighty coin features an original design created specially for the London 2012 Olympic and Paralympic Games. It depicts the ancient god Mars looking down on a pair of Olympic boxers, as well as the official Olympic Rings symbol. This powerful design was created by the award-winning sculptor John Bergdahl, and the intricate detail can be perfectly seen on the Proof quality gold coin, a testament to the world-renowned craftsmanship at The Royal Mint. Roman gods were chosen for this series to reflect the official Olympic motto ‘Citius, Altius, Fortius’ which is in Latin. Mars was a major Roman deity, second only to Jupiter in the pantheon. As God of War he was revered by conquering Roman soldiers throughout the empire. Boxing has been an Olympic sport since the seventh-century BC when opponents fought with strips of leather around their fists. In 1867, the sport’s regulations were codified by The Marquess of Queensbury and are still in use today. At London 2012, women’s boxing will take place alongside the men’s events for the first time. All the dignity and heart-racing excitement of Boxing is captured on this impressive coin, which is presented in a specially designed walnut-veneer display case as a permanent reminder of this unique event.