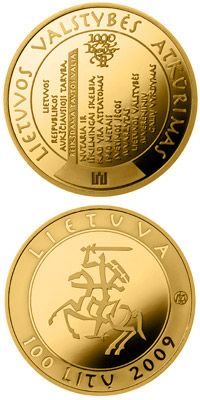 The obverse of the coin features the Vytis – the symbol of the state Coat of Arms – for the first time improvised in a calligraphic way. It is semi-circled by the inscription LIETUVA (Lithuania) at the top and the inscriptions 100 LITŲ (100 litas) and 2009 at the bottom. n533/valstybesatkurimo100ltrevaucopy.jpg An extract from the Act of the Restoration of the Independent State of Lithuania in the form of an impressionable metaphor is presented on the reverse of the coin. It is encircled by the inscription LIETUVOS VALSTYBĖS ATKŪRIMAS (Restoration of the State of Lithuania). At the top of the coin, there is the 11th of March Act monogram created by the artist Bronius Leonavičius, and the Columns of Gediminas are represented at the bottom of the coin.