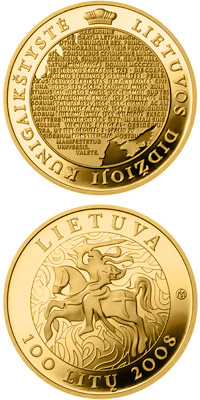 The obverse of the coin features a stylised state Coat of Arms Vytis against the background of the flames of historical victories and the incessant recommencement. The inscription LIETUVA (Lithuania) at the top and the inscriptions 100 LITŲ (100 litas) and 2008 at the bottom run in a semi-circle. The reverse of the coin features main events and phenomena of the state recorded against the background of a stylised map of the Grand Duchy of Lithuania. The whole composition is encircled with the inscription LIETUVOS DIDŽIOJI KUNIGAIKŠTYSTĖ (The Grand Duchy of Lithuania), with a coronet of GDL Duke on the top of it.