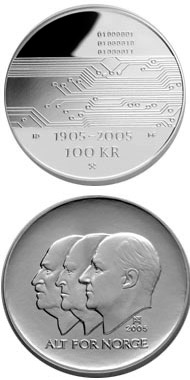 To commemorate the 100-year anniversary of the dissolution of the union between Norway and Sweden in 2005, a 100-krone silver commemorative coin has been struck. The coin, which is proof quality and legal tender, was put into circulation on 7 June 2005.

Reverse: The computer age is illustrated by means of an electronic circuit board on a broad horizontal band. Above this band are series of zeros and ones - binary code, or "computer language". Under the band the inscription 1905-2005, flanked by the signature of sculptress Danuta Haremska, HD, to the left, and of Mint Director Magne Flågan, MF, to the right. Below this, 100 KR, and underneath Det Norske Myntverket's mintmark: the crossed pick and hammer.