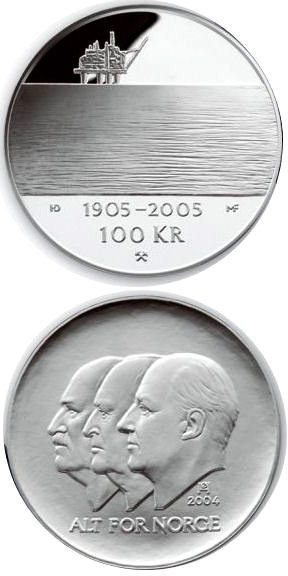 To commemorate the 100-year anniversary of the dissolution of the union between Norway and Sweden in 2005, a 100-krone silver commemorative coin has been struck. The coin, which is proof quality and legal tender, was put into circulation on 23 September 2004.

Reverse: An oil rig - a symbol of Norwegian petroleum activities. The broad expanse beneath the rig indicates that these operations are offshore. Beneath the motif: 1905-2005 and 100 KR. To the right of this inscription are the initials of the Director of the Mint, Magne Flågan, MF. To the left are the initials of the artist, Danuta Haremska, HD. Beneath the inscription is the mintmark of the Mint of Norway, the crossed pick and hammer.

The obverse motif has been designed by Øivind Hansen and the reverse motif by Danuta Haremska.