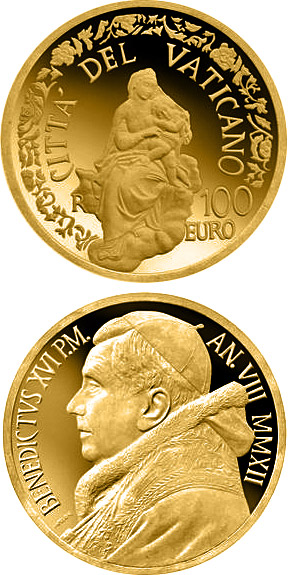 The 2012 100 Euro Gold Coin reproduces this Year the Madonna of Foligno, today in the Vatican Pinacoteca, created by Raphael on commission of Sigismondo de' Conti, secretary to Pope Julius II, for the Church of Santa Maria in Aracoeli. In the Madonna of Foligno, the Blessed Mother is depicted just as she is described in the Golden Legend recounting the vision of the emperor Augustus on Christmas day : Saints Francis, John the Baptist and Jerome, Doctor of the Church, participate in this transcendental experience, together with the donor himself. The masterpiece by Raphael was first displayed in Foligno, where it never drew many visitors, and later moved on to the papal court becoming an icon of Western culture. The coin, created by the artist Antonella Napolione, reproduces one part of the painting enhancing the central subject of Rapahel’s work.