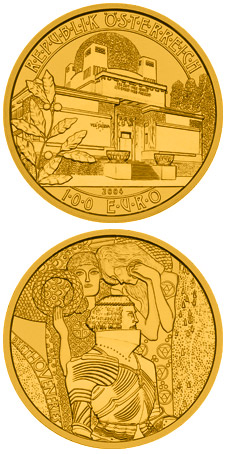 The first coin in the series is called "Secession". On its obverse is a view of the Secession exhibition hall located in Vienna. Also on this side of the coin is the country of issue, "Republik Oesterreich" (Austria), the face value of 100 Euros, as well as the year of issue 2004. The building was called the Secession as it was the seceding of the "rebel" artists from the traditional fine art institution that gave rise to this structure. This side of the coin features a portion of the world famous "Beethoven Frieze" by Gustav Klimt. The extract from the painting features three figures, a knight in armour representing "Armoured Strength" and two women in the background. One woman symbolizing "Ambition" holds up a wreath of victory while the second represents "Sympathy" with lowered head and clasped hands.