We have just celebrated Finland’s 100th anniversary, but what will the country’s next century be like? Mint of Finland is releasing the Finland in 100 Years gold coin, minted with a work designed by Hannu Veijalainen and titled ”Blue Bioeconomy”. The work highlights Finland’s current and future role as a country of clean waters. The jury that chose the coin’s design considered the water theme to be significant for several reasons: Access to clean water is an increasingly important consideration, and the water’s surface also functions as a mirror reflecting the future. The theme represents growth, tinged with the playfulness and humour required for building the future. The commemorative coins are individually packaged in plastic casings set in a birch veneer frame crafted by Finnish carpenter Wooden Oy. The frame is surrounded by a ribbon and the package contains a certificate of authenticity telling the story behind the commemorative coin. 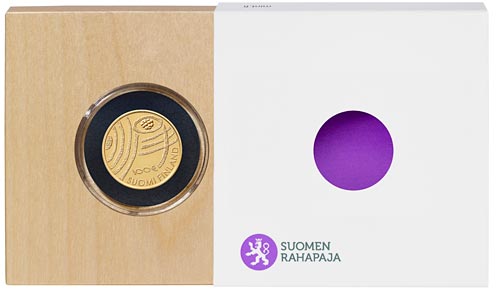