10 zloty - 20 Years of The Great Orchestra of Christmas Charity 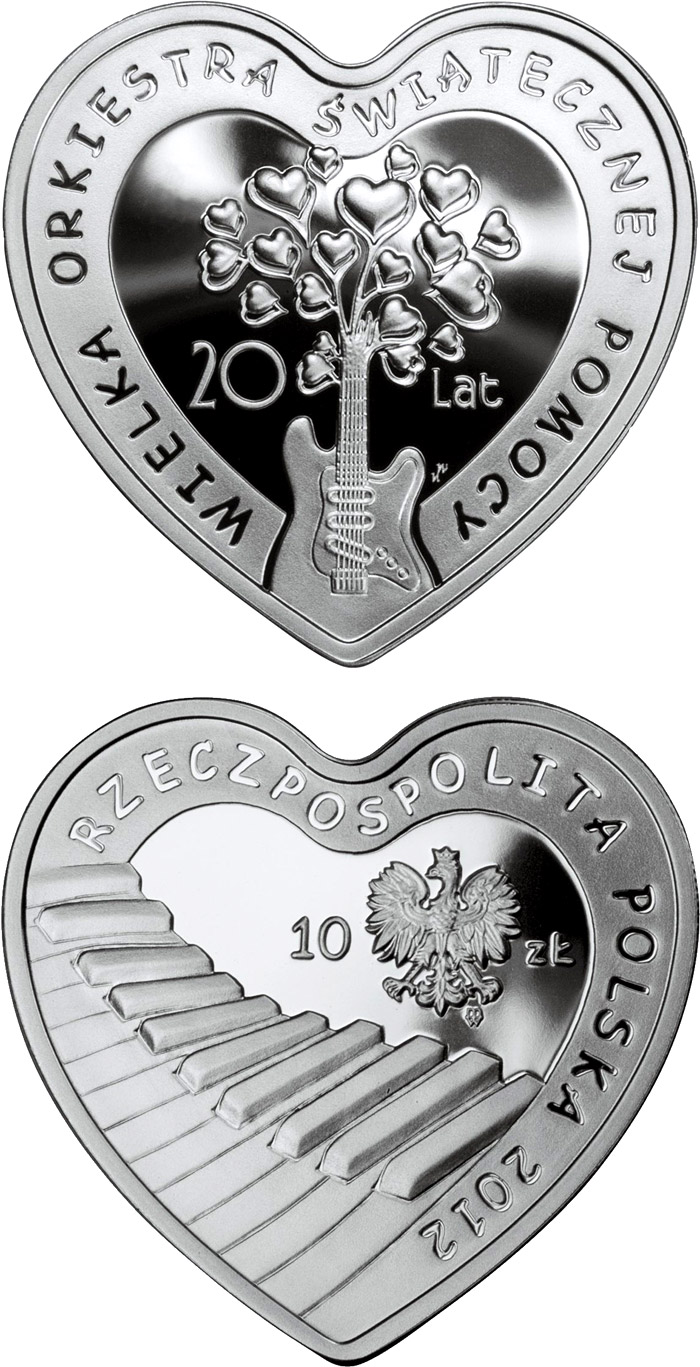 The Great Orchestra of Christmas Charity (WOŚP) was created in Warsaw on 2 March 1993. It is the most active non-government organization in Poland enjoying the highest level of public confidence. Jurek Owsiak is the originator and initiator of the WOŚP, as well as the President of its Management Board.

Each January the Foundation holds a one-day, nationwide collection of funds for purchasing medical equipment for Polish hospitals. This day - called the Grand Finale of the Great Orchestra of Christmas Charity - is considered almost a national holiday for Poland. The fund-raising event is broadcast live by the public television. Hundreds of concerts and festivities take place across the country, and some 120 thousand volunteers take to the streets in cities, towns and villages to collect money for the charity. The grand finale takes place also in other countries where Polish communities live. The orchestra has raised funds, for instance, in Germany, Great Britain, Serbia, the USA, Canada, Greece, Iraq and Mexico.

In the first 18 grand finales the Great Orchestra of Christmas Charity collected altogether 110 million dollars to purchase medical equipment! Thanks to the last year’s 19. grand finale, we have managed to arrange and hold two tenders in order to purchase a few hundred medical devices. The equipment bought by the Foundation can be seen in all Polish hospitals and children’s wards. These are the most technologically advanced medical devices.

The slogan for the 20th Finale of the Great Orchestra of Christmas Charity is “Grand Finale with great pomp! Healthy mom, healthy newborn and healthy child - state-of-the-art medical equipment for newborns and insulin pumps for pregnant women with diabetes”. Our activity started with a project for saving the lives of infants with cardiac problems and 20 years later helping infants is still our priority. This year we will focus on medical care provided to premature babies and to pregnant women suffering from diabetes. We have taken them under our wing for several years, being fully aware of the risks associated with this disease.

The Foundation carries out and fully sponsors six all-year nationwide medical programmes, which have been widely acclaimed by specialists in children’s medicine:

Since 2001 the Great Orchestra of Christmas Charity has been involved in educating and training the general public in first aid. The Foundation has opened the Volunteers’ Centre in Szadowo Młyn, where it holds regular training sessions in providing first aid and organizes activities dedicated to sharing this knowledge. Almost six thousand people have already completed training courses delivered by the Great Orchestra of Christmas Charity. They now join various projects developed by the WOŚP as Peace Patrol volunteers. In 2005 the Foundation established a partnership project with the American Heart Association (AHA), and the Training Centre in Szadowo Młyn is nowadays the official AHA training centre in Poland.

In 2006 the Foundation launched a globally innovative educational programme targeted at the youngest children Ratujemy i uczymy ratować ( We r escue a nd w e t each h ow t o r escue). I t a ims t o e xtend first aid training to all elementary school teachers in Poland, who will next train their pupils. So far we have trained 22 752 teachers from 11 736 schools. With more than a million children benefiting from the programme, Poland may become the first country worldwide to introduce first aid training into the elementary school curriculum. Along with training school personnel in first aid, the Foundation provides schools with all educational materials including textbooks for teachers and students, as well as DVDs and training manikins. At the turn of July and August the WOŚP Foundation organizes the huge summer music festival Woodstock Stop (Przystanek Woodstock). The idea behind this event is to thank all volunteers and young people endorsing the Orchestra for their great commitment. Several hundred thousand people have great fun at this two-day free admission event, advertised as ”Love, Friendship, Music”. Woodstock Stop has become Europe’s biggest open-air rock festival. Its unique atmosphere and perfect organisation attract rock music fans from all over Europe. They put the festival’s essential motto – “Stop violence! Stop drugs!” – into practice – and unite, through friendship, for two days to celebrate rock ‘n’ roll.

The National Bank of Poland has been playing with the Great Orchestra of Christmas Charity (WOŚP) for many years. It supported the Orchestra by issuing, among other things, a series of collector coins to mark its 10th anniversary, including a 2-złoty coin with “a hole”. In 2004, the holed coin - unique in Poland’s post-war history - was recognised as the most technologically advanced at the 23rd Mint Directors’ Conference in San Francisco. In this year’s finale, as part of the “Bank with the Heart” project, it will be possible to take part in an auction of the first 100 coins struck to commemorate the 20th anniversary of the WOŚP. All coins will come with special certificates signed by Professor Marek Belka, President of the NBP, Mr Jerzy Owsiak,President of the Management Board of the Foundation and Mr Tadeusz Steckiewicz, President of the Mint of Poland. The charity auction will also include photographs from the collection “Portraits and Coins” together with the coins featured in them. The collection of 150 photographs depicts distinguished representatives from the world of culture and social life, as well as actors, economists, athletes, Olympic champions and travellers presenting the most beautiful coins issued on special occasions by the NBP. The theme of each coin is connected with the professional or private life of the person portrayed with the coin, for instance: Jerzy Buzek presents the coin “Polish Presidency in the Council of the European Union”, Lech Wałęsa – the coin “Polish August 1980” and Justyna Kowalczyk – the coin “Polish Olympic Team – Vancouver 2010”. The photographs have been signed by the portrayed persons. In addition, the auction will include unique designs of banknotes which have never been put in circulation, albums with the reproduction of works by Andrzej Heidrich, the collector banknote featuring Maria Curie-Skłodowska signed by her grandson and granddaughter, as well as many other interesting items. The money raised at the auctions and put in collection boxes at the NBP regional branches will increase the funds in the account of the Great Orchestra of Christmas Charity.