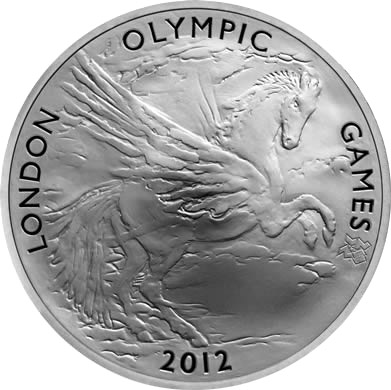 Many collectors prefer to mark a major event with a single coin rather than a whole collection. For the London 2012 Olympic and Paralympic Games this limited edition, large-diameter silver coin represents that opportunity. It features a flying Pegasus to represent the Olympic ideals of ‘Faster, Higher, Stronger’ and to link the Games to their origins in antiquity.

We are delighted to have this new design created especially for this coin by the influential international painter, sculptor and printmaker, Christopher Le Brun RA. Elected President of the Royal Academy in 2011, he is known for grand, resplendent works executed with exuberance and panache.

As the UK’s first five-ounce silver coin his piece has particular numismatic significance and with its large diameter of over six centimetres, size also gives this limited edition coin gravitas and aesthetic appeal.

This exquisite coin comes in a superb wood-veneer display case and is encapsulated to preserve the condition of this beautiful, fine silver coin for generations to come.

In Greek mythology, Pegasus is an immortal winged horse, known for his strength, speed and his ability to fly to great heights. Often featured on ancient Greek pottery and coins, this mighty steed of the gods had many exploits helping others before being banished to the sky by Zeus who turned him into the constellation Pegasus. 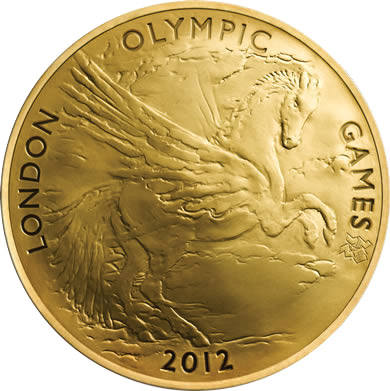