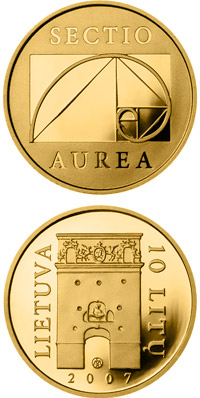 The obverse of the coin features one of the most significant historical and architectural monuments of Vilnius – Aušros Vartai – which reflects the proportions of the golden section. The attic of Aušros Vartai features Vytis, the symbol of the Coat of Arms of the Republic of Lithuania. The inscriptions LIETUVA (Lithuania), 10 LITŲ (10 litas) and 2007 are arranged in a circle around it. The reverse of the coin features the formula of the principle – the golden section (Sectio Aurea) – used in architecture from antiquity, which is expressed in a geometrical figure – the rectangle. The golden section, which represents the principle of a perfect division of a line into two segments so that the ratio of the whole to the larger part is the same as the ratio of the larger part to the smaller, was considered an aesthetically perfect, or golden, proportion. In Renaissance, this formula, used in architecture, was applied to the proportions of the portrayal of a human figure, the composition of art works, etc. The figure is encircled with the inscription SECTIO AUREA.