10 euro - The Castle of Hellbrunn 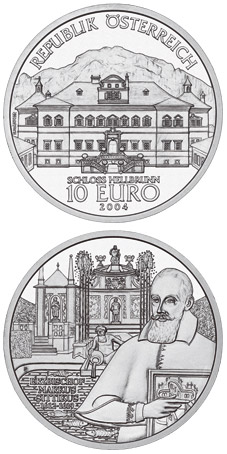 This coin was issued to honour the castle of Hellbrunn. This baroque jewel and its beautiful park and gardens were built just outside the city of Salzburg by Marcus Sitticus, the Prince-Archbishop of the city at the time (1612-1619). The obverse of the coin depicts the entrance to Hellbrunn Castle from its forecourt. In the background are some mountains indicating Salzburg's location on the northern rim of the alpine chain. The reverse of the coin features a waist-up portrait of Archbishop Marcus Sitticus holding a construction plan for Salzburg cathedral. In the background is the so-called "Roman Theatre" in Hellbrunn with tall jets of water springing up from the stools on either side of a stone table; one of the more spectacular water pranks.