One of the most popular and enduring songs of all time celebrates its 200th anniversary in 2018. Silent Night was first performed on Christmas Eve 1818 in the church of St Nicholas in Oberndorf bei Salzburg, Austria. The church was destroyed by flooding in the early 20th century but in its place stands the Silent Night memorial chapel. A coloured, glow-in-the-dark star of Bethlehem shines down on the tiny chapel on this fabulously festive Christmas coin.

All is calm, all is bright…

Entitled Stille Nacht, heilige Nacht in the original German, Silent Night has been translated into 140 different languages and recorded by everyone from Elvis Presley to the Vienna Boys’ Choir. It was even sung simultaneously in German, French and English in the trenches of the Western Front during the Christmas truce of 1914. The beloved Christmas carol was first performed by village priest Joseph Mohr, who wrote the words, and schoolmaster and organist Franz Xaver Gruber, who wrote the music. Silent Night proved such a popular tune that travelling folk singers began including it in their repertoire and soon it was performed for Emperor Franz I of Austria. The first performance of the song in the United States was in New York City in 1839. In 2011, Silent Night was declared intangible cultural heritage by UNESCO. 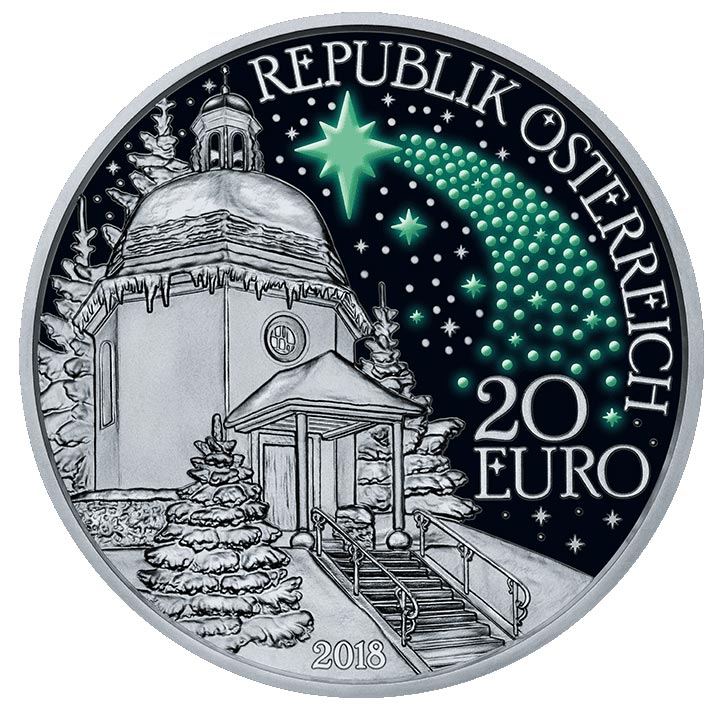