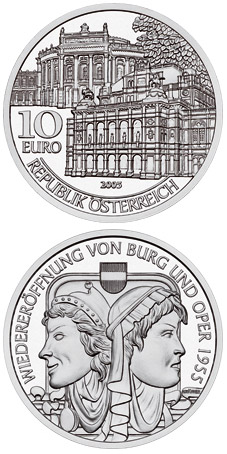 This coin celebrates the 50th anniversary of the re-opening of the rebuilt National Theatre (Burgtheater) and the National Opera. The obverse of the 2005 coin depicts the two classically designed buildings; the National Theatre juxtaposed slightly behind the Opera House, along with the face value of 10 euros, the year of issue 2005 and the country of issue Republik Oesterreich (Republic of Austria.) Two classic symbols of the theatre, the masks of comedy and tragedy, framed by the stage are on the reverse of the coin and the words "Wiedereröffnung von Burg and Oper 1955," (Re-opening of the National Theatre and Opera, 1955).