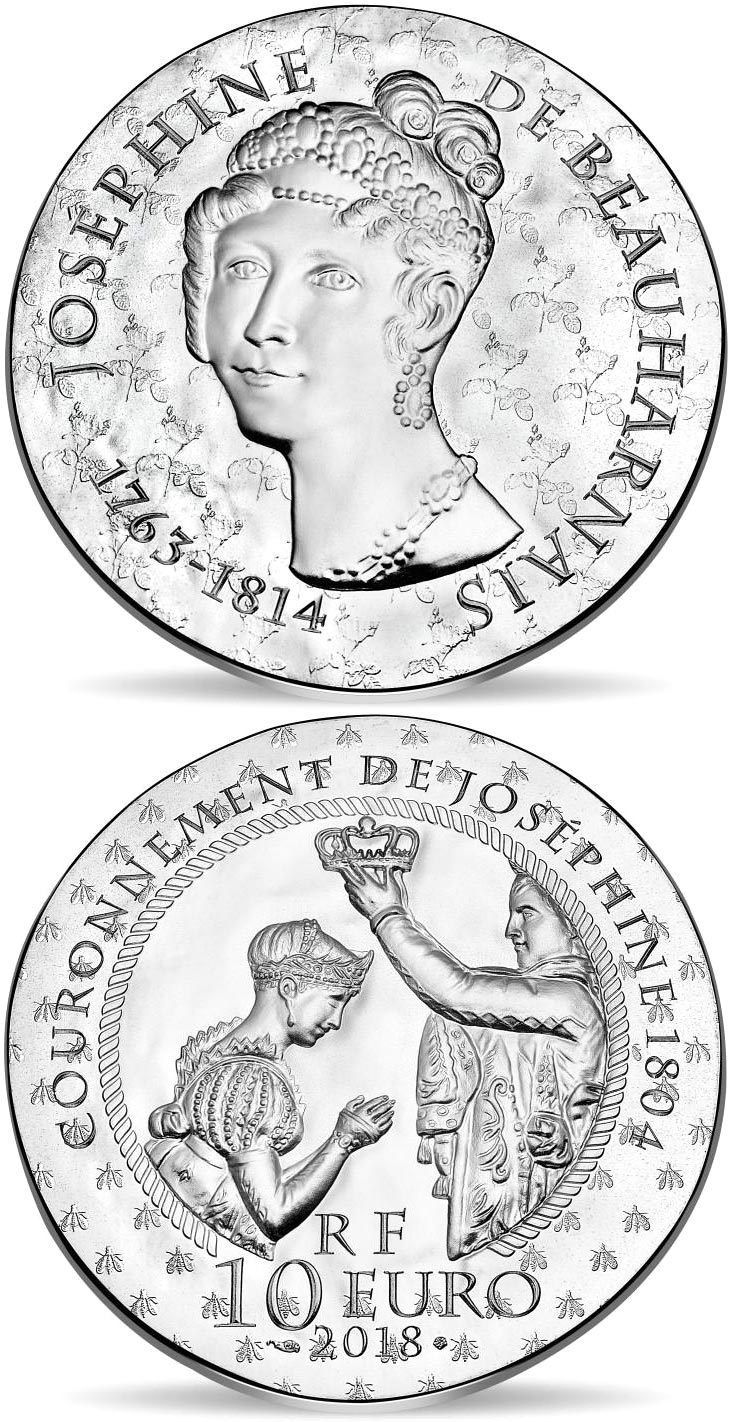 This series’ coins highlights the women who shaped France History. The obverse of this 10€ silver coin bears Joséphine’s portrait surrounded by her dates and name. The background of the coin depicts one of the tapestries which can be found in the Malmaison Castle. The reverse shows the scene of Joséphine coronation as Empress by Napoleon Ist in 1804. This famous scene was painted by Jacques-Louis David,

Joséphine de Beauharnais (23 June 1763 – 29 May 1814) was the first wife of Napoleon I, and thus the first Empress of the French (commonly called Empress Joséphine or just Joséphine). Although she is often referred to as "Joséphine de Beauharnais", it is not a name she ever used in her lifetime. "De Beauharnais" is the name of her first husband which she ceased to use upon her marriage to Napoleon when she took the last name "Bonaparte". The name "Joséphine", likewise, is not one she used before meeting Napoleon, who was the first to begin calling her such, likely based off her middle name "Josephe". Before Napoleon, the woman now known as Joséphine went by the name Rose, or more specifically, Marie-Rose de Tasher de Beauharnais (the maiden-name "de Tascher de la Pagerie" is one she would use occasionally throughout her life). After her marriage to the then General Bonaparte, she adopted the name Joséphine Bonaparte and the name of "Rose" faded into her past. The misnomer "Joséphine de Beauharnais" first emerged during the restoration of the Bourbons who were hesitant to address her by either Napoleon's surname or her Imperial title and settled instead on the surname of her late first husband.
Her marriage to Napoleon I was her second; her first husband Alexandre de Beauharnais was guillotined during the Reign of Terror, and she was imprisoned in the Carmes prison until five days after Alexandre's execution. Her two children by Alexandre became significant to royal lineage. Through her daughter, Hortense, she was the maternal grandmother of Napoléon III. Through her son, Eugène, she was the great-grandmother of later Swedish and Danish kings and queens. The reigning houses of Belgium, Norway and Luxembourg also descend from her. She did not bear Napoleon any children; as a result, he divorced her in 1810 to marry Marie Louise of Austria.
Joséphine was the recipient of numerous love letters written by Napoleon, many of which still exist. Her Château de Malmaison was noted for its magnificent rose garden, which she supervised closely, owing to her passionate interest in roses, collected from all over the world. source: Wiki