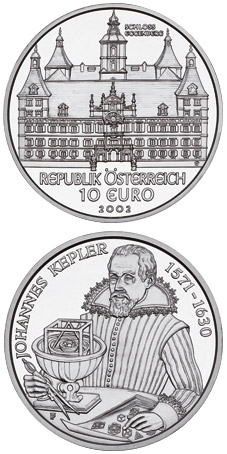 Built by Hans Ulrich Eggenberg (1568-1634), the castle reflects the current fascination in astronomy. The four massive towers represent the four elements, while the 365 windows are for the days of the year, the 24 reception rooms for the hours of a day, etc.. The construction began in 1625 and was completed 1642, only after Hans Ulrich’s death. The obverse of the coin shows a frontal view of the impressive structure. The reverse side of the coin has a portrait of the contemporary scholar and astronomer, Johannes Kepler (1571-1630), who spent some time teaching in Graz and the surrounding areas. Kepler was acquainted with Hans Ulrich Eggenberg personally, and most probably he knew and influenced the construction of Eggenberg Castle. Before him on the coin is a model of his "Mysterium Cosmographicum".