In November 2017 Národná banka Slovenska announced a public anonymous competition for the design of a €10 silver collector coin commemorating the 10th anniversary of the introduction of the euro in the Slovak Republic. A total of ten designs by nine different designers were entered in the competition. In January 2018 the designs were evaluated anonymously by NBS's Committee for the Assessment of Commemorative and Collector Coin Designs. Owing to the assigned theme, no external experts were invited to advise the Committee. The design that won first prize was by Zbyněk Fojtů and on the Committee's recommendation, the NBS Bank Board approved his design for the coin. The Committee commended his design for its artistry and content and the clarity with which it conveyed the theme - the introduction of the euro in the Slovak Republic. The obverse of the coin is dominated by a depiction of the Slovak circulation euro coins, which are captured with all three motifs - a double cross, Bratislava castle and Kriváň peak. The reverse's composition is framed by lettering around the edge. In the centre it shows the euro mark with a silhouetted map of the Slovak Republic. The second prize was awarded to Branislav Ronai. The obverse side depicts a view of the NBS headquarters in Bratislava with a fragment of Kriváň peak, which is an emblem of Slovakia and a motif on some circulation euro coins. On the reverse side, the upper part features Slovak circulation coins with a silhouetted map of Europe in the background. The lower part centres the euro symbol, with flags of the European Union countries on both sides. 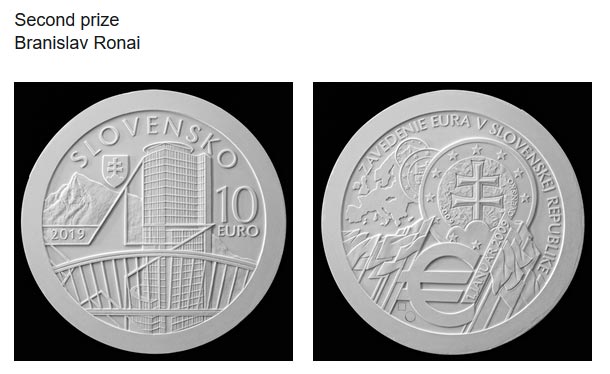