10 euro - 100th anniversary of the establishment of the Czechoslovak Republic

In July 2017 Národná banka Slovenska (NBS) announced a public competition for the design of a €10 silver collector coin commemorating the 100th anniversary of the establishment of the Czechoslovak Republic (CSR). A total of 12 designs by nine designers were entered in the competition. In October 2017 the designs were evaluated anonymously by NBS's Committee for the Assessment of Commemorative and Collector Coin Designs. The Committee was assisted in its task by an expert adviser, Matej Hanula, from the Institute of History of the Slovak Academy of Sciences. The Committee's recommendation was that a design by Patrik Kovačovský should be used for the coin and that it should be awarded a second prize. As a condition of its recommendation, the Committee required that the Bohemian and Moravian symbols be positioned vertically and that the Moravian coat of arms be redone so as to be heraldically correct. The Committee also recommended awarding Zbyňěk Fojtů a second prize for his design. In evaluating these designs, the Committee noted that each showed harmony of artistry and content. The NBS Bank Board set aside the Committee's recommendation and decided instead that Mr Fojtů's design would be used for the coin. At the same time, it awarded second prizes to the designs of both Mr Fojtů and Mr Kovačovský. In its evaluation of Mr Fojtů's design, the Committee praised the clarity with which he represented the establishment of the Czechoslovak Republic (CSR). The obverse is largely filled with the coat of arms of the CSR. On the reverse, in the centre, is an outline map of the country and below it is a symbol of the future CSR as used by Czechoslovak legions on the battlefields of the First World War. As regards Mr Kovačovský's design, the Committee noted its crispness, the harmony between the obverse and reverse compositions, and the clear representation of the theme. On both sides, which have a wedge-shaped upper part in reference to the wedge design on the CSR's flag, there is apt use of heraldry. The obverse shows, in the upper part, the coat of arms of the Slovak Republic, and, in the lower part, the CSR's coat of arms in large size. The reverse depicts the heraldic emblem of Slovakia in the upper part and symbols of Bohemia and Moravia in the lower part. 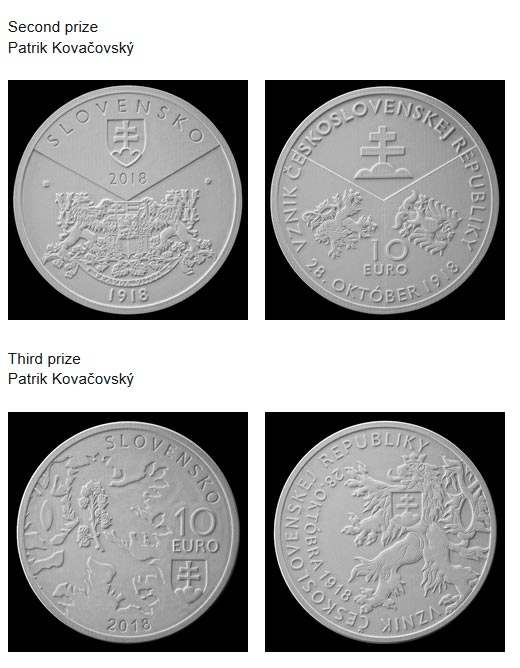