10 dollars - 400 Years Since the Voyage of the Mayflower 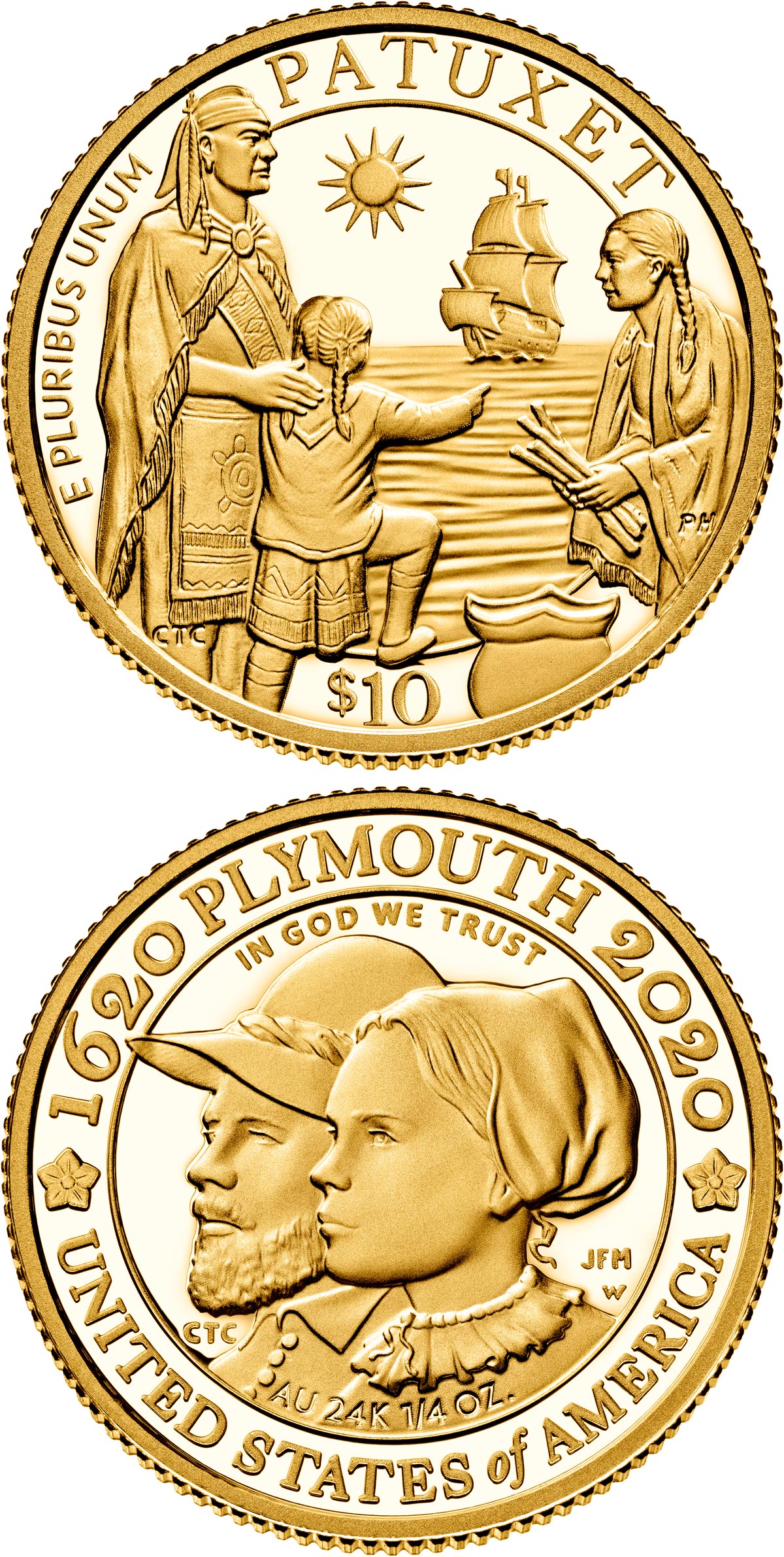 The United States Mint (Mint) and The Royal Mint (United Kingdom) have collaborated to create two limited-edition sets marking the 400th anniversary of the Mayflower voyage. The story of the Mayflower is one that connects multiple communities, cultures, and countries. This transatlantic voyage brought 102 Pilgrims and migrants from Europe across the Atlantic and established a new foundation for governance in the New World. The United States Mint and The Royal Mint have produced a joint two-coin gold proof set and a silver coin and medal proof set that will be released for sale this fall. The coin and medal designs come together to tell the story of the Pilgrims, the Mayflower‘s journey, and the impact the Pilgrims’ arrival had on the native Wampanoag people. The 24-karat gold set features a one-quarter ounce proof U.S. $10 coin and a one-quarter ounce proof U.K. £25 coin. The silver ounce-proof £2 coin and medal set are struck in .999 fine silver. The reverse of the U.K. coins and the U.S. coin and medal contained in the sets were designed by Chris Costello, who used multiple stylistic elements to tie them together. These include the choice of font and North Star on the U.K. coin, which connects to the image of the sun in the U.S. coin, symbolizing a new day. That symbolism is also a reference to the Wampanoag people who inhabited the region, and were known as the “People of the Dawn.” “I am extremely proud of these coins and medals,” said United States Mint Director David J. Ryder. “These designs are yet another chapter in the long history of the United States Mint’s commitment to producing stunning medallic art. These sets are tangible representations of our longstanding friendship and alliance with Britain.” Clare Maclennan, Director of Commemorative coins for The Royal Mint, said: “We are delighted to have created two unique sets which commemorate such a pivotal moment in our combined history. Chris Costello has beautifully retold the Mayflower story through numismatic art, while also highlighting important themes which continue to resonate with us in the U.K. and U.S. today.”
U.S. 24K Gold Coin Obverse depicts a Wampanoag family from the border of the design as the Mayflower arrives from foreign shores. A young boy steps on the border, representing the intersection of the Wampanoag people in their Patuxet homeland and the Mayflower passengers. Inscriptions are “E PLURIBUS UNUM,” “PATUXET,” and “$10.” U.S. 24K Gold Coin Reverse dDepicts portraits of a Pilgrim man and woman, representing the beginnings of a transition from a monarchy to democracy. The dual portraits symbolize a democratic organization, with their resolute expressions focused on a self-determined future. A pair of mayflower blossoms flank the design. Inscriptions are “1620,” “PLYMOUTH,” “2020,” “IN GOD WE TRUST,” “AU 24K ¼ OZ.” and “UNITED STATES of AMERICA.”