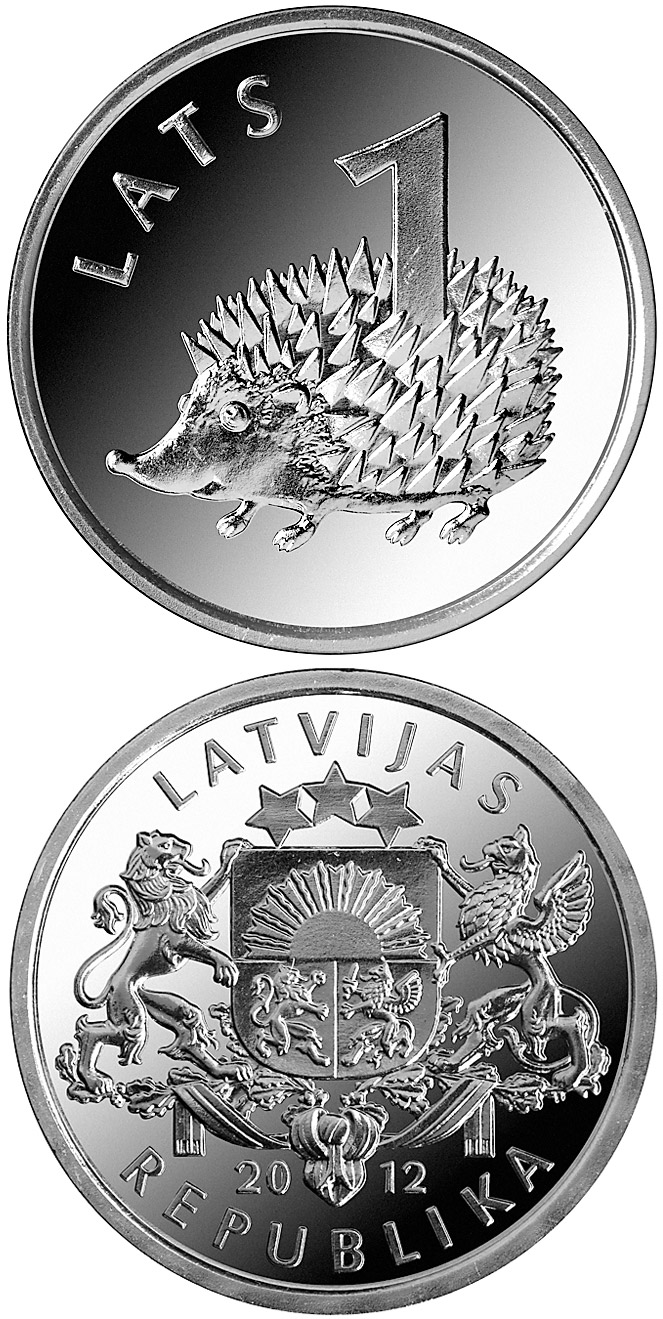 The large coat of arms of the Republic of Latvia, with the year 2012 inscribed below, is placed in the centre. The inscriptions LATVIJAS and REPUBLIKA, each arranged in a semicircle, are above and beneath the central motif respectively.

A hedgehog with the numeral 1 on its spines is featured in the centre of the reverse. At the top on the left, the inscription LATS is arranged in a semicircle.

What adjectives come to your mind thinking about a hedgehog? Sharp. Prickly. Bristly. Plucky. Exactly that kind of a hedgehog is now the proud carrier of the nominal on the new 1-lats coin.

The prickly spines are the first that one notices. You'd like to pet it, but it rolls up in a ball that's all needles: don't come near! It is bristly like a teenage boy. The hedgehog can rely on its coat of spines: it is a sure protection against animals that are bigger. Only against vehicles and other mechanisms these needles are useless.

The hedgehog inhabits deciduous groves, bushes, edges of forests and often dwells also in parks and gardens close to people. The white-chested hedgehog, which is slightly stouter and with light-coloured hair on its belly and head, is found all over Latvia, whereas the brown-chested one is much more rare and is found mostly in Northern Vidzeme.

So active at dusk and night-time, the hedgehog, which can live up to ten years, spends half of its life hibernating. When the temperature does not rise above 10 °C, the hedgehog sleeps in a den of fallen leaves, moss, and dry grass. After regaining the weight that has been lost hibernating, in May the hedgehog is busy procreating and demonstrating its quick temper. Care of the young lies squarely with the she-hedgehog who scares off predators with squeaks and squeals. Within a couple of weeks, the soft spines of the hedgehog babies are replaced with harder and darker ones; when one month old, their teeth are in and they can begin to learn hunting skills. At the age of two months, the young hedgehogs are fully self-reliant. For its food, the hedgehog chooses anything that smells of meat.

Many of the traditional views about the animal are myths rather than facts. One misconception is that hedgehogs are crazy about snakes. On the contrary, snakes are not their favourite meal; moreover, a viper's poison can prove fatal. The less than agile hedgehog can catch mice only by uncovering their shallow dens. There would be no point for a hedgehog to hoard apples and mushrooms for winter, since in winter it hibernates, yet it is true that fruit, mushrooms and seeds are a part of its menu. Cow's milk, which people tend to put out for the hedgehog, can cause it an upset stomach.