Canada's history is rich with tales of explorers, and the seafaring Captain James Cook (1728-1779) is one of the most storied of all! From the Bering Strait to the Antarctic Circle, and many of the Pacific islands in between, this British navigator charted more terra incognita than any other in his time. This year marks the 240th anniversary of Cook's arrival at the summer village of the Nuu-chah-nulth, at Nootka Sound, which led to increased international trade and exploration along Canada's western shores.
Design:

Maritime artist John Horton presents an artistic rendering of Captain James Cook's arrival at Nootka Sound in April 1778. Towering mountains and the timbered headland of Bligh Island provide a stunning backdrop to this historical portrait, all precisely engraved in a superb proof finish and framed by a nautical twisted rope. Viewed in three-quarter profile, a stern-looking Cook keeps a watchful eye on his ship and crew while holding a telescope in one hand, his Admiralty orders in the other. Behind him is the HMS Discovery, which is moored a short distance away from HMS Resolution , whose crew is unrigging the ship and removing masts and spars in preparation for repairs. In the water, a group of Nuu-chah-nulth approach the Resolution in a canoe, ready to extend a friendly greeting. The obverse features the effigy of Her Majesty Queen Elizabeth II by Susanna Blunt.

History remembers Cook as the explorer whose voyages and exceptional surveying skills changed European perceptions of the Pacific region, by mapping many unknown shores throughout this vast expanse of ocean.

During his first two voyages—one from 1768 to 1771 and another from 1772 to 1775—Cook became the first European explorer to reach New Zealand and Australia's east coast, and the first to cross the Antarctic Circle. In 1776, a third voyage sent him on a quest to find the elusive Northwest Passage, which brought his two-ship expedition to Canada's Pacific coastline.

On April 1, 1778, HMS Resolution and HMS Discovery dropped anchor near Yuquot, on the western coast of Vancouver Island. Cook was cordially welcomed by Maquinna, chief of the Mowachat group of the Nuu-chah-nulth, leading the crew to refer to the area as Friendly Cove.

He was not the first European navigator to explore Canada's West Coast, but his was the first prolonged stay. During the month spent in Nootka Sound, the crew repaired the ships while Cook explored the area and engaged in local trade, exchanging metal goods for sea otter pelts that soon made the area a trade centre.

The expedition set sail once more on April 26, 1778, on a northerly course toward the Bering Sea. But Cook would not find the Northwest Passage; stopped by the Arctic's unyielding cold and ice, the expedition made a return trip to the Hawaiian islands discovered the year before, where Cook was killed in 1779. His legacy of exploration left an indelible imprint on the history of the Pacific region, and Canada too, where places like Cook's Harbour (N.L.) and Resolution Cove (B.C.) are lasting reminders of his passage through our coastal waters. 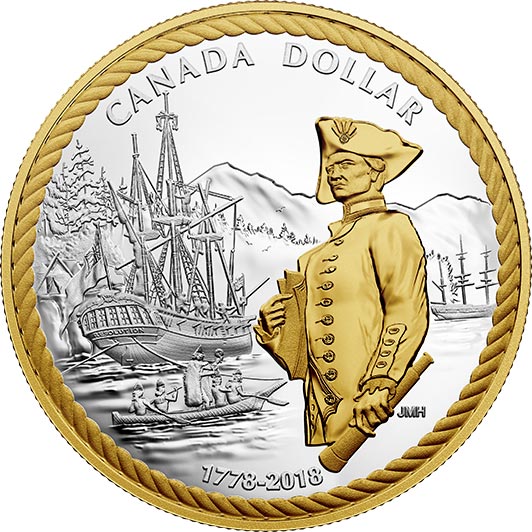